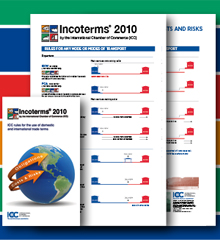 INTRODUCTION
Taken from “Incoterms® 2010”, available at  the ICC Bookstore

Main features of the Incoterms® 2010 rules

The number of Incoterms® rules has been reduced from 13 to 11. This has been achieved by substituting two new rules  that  may be used  irrespective  of the agreed  mode  of transport  – DAT,  Delivered  at Terminal, and DAP, Delivered at Place – for the Incoterms® 2000 rules DAF, DES, DEQ and DDU. Under both new rules, delivery occurs at a named destination: in DAT, at the buyer’s disposal unloaded from the arriving vehicle (as under the former DEQ rule); in DAP, likewise at the buyer’s disposal, but ready      for      unloading      (as      under      the      former      DAF,      DES      and      DDU      rules). The new rules make the Incoterms® 2000 rules DES and DEQ superfluous. The named terminal in DAT may well be in a port, and DAT can therefore safely be used in cases where the Incoterms® 2000 rule DEQ once was. Likewise, the arriving “vehicle” under DAP may well be a ship and the named place of destination may well be a port: consequently, DAP can safely be used in cases where the Incoterms®
2000 rule DES once was. These new rules, like their predecessors, are “delivered”, with the seller bearing all the costs (other than those related to import clearance, where applicable) and risks involved in bringing the goods to the named place of destination.

The 11 Incoterms® 2010 rules are presented in two distinct classes:


RULES FOR ANY MODE OR MODES OF TRANSPORT

CIP CARRIAGE AND INSURANCE PAID TO


The first class includes the seven Incoterms® 2010 rules that can be used irrespective of the mode of transport selected and irrespective of whether one or more than one mode of transport is employed. EXW, FCA, CPT, CIP, DAT, DAP and DDP belong to this class. They can be used even when there is no maritime transport at all. It is important to remember, however, that these rules can be used in cases where a ship is used for part of the carriage.
In the second class of Incoterms® 2010 rules, the point of delivery and the place to which the goods are carried to the buyer are both ports, hence the label “sea and inland waterway” rules. FAS, FOB, CFR and CIF belong to this class. Under the last three Incoterms rules, all mention of the ship’s rail as the point of delivery has been omitted in preference for the goods being delivered when they are “on board” the vessel. This more closely reflects modern commercial reality and avoids the rather dated image of the risk swinging to and fro across an imaginary perpendicular line.

3. Rules for domestic and international trade

Incoterms® rules have traditionally been used in international sale contracts where goods pass across national borders. In various areas of the world, however, trade blocs, like the European Union, have made border formalities between different countries less significant.  Consequently,  the subtitle of the Incoterms® 2010 rules formally recognizes that they are available for application to both international and domestic sale contracts. As a result, the Incoterms® 2010 rules clearly state in a number of places that the    obligation    to    comply    with    export/import    formalities    exists    only    where    applicable. Two developments have persuaded the ICC that a movement in this direction is timely. Firstly, traders commonly use Incoterms® rules for purely domestic sale contracts. The second reason is the greater willingness in the United States to use Incoterms® rules in domestic trade rather than the former Uniform Commercial Code shipment and delivery terms.

Before  each Incoterms®  2010  rule  you will find a Guidance  Note.  The  Guidance  Notes  explain  the fundamentals of each Incoterms® rule, such as when it should be used, when risk passes, and how costs are allocated between seller and buyer. The Guidance Notes are not part of the actual Incoterms® 2010 rules,  but  are  intended  to  help  the  user  accurately  and  efficiently  steer  towards  the  appropriate Incoterms® rule for a particular transaction.

Previous versions of Incoterms® rules have specified those documents that could be replaced by EDI messages. Articles A1/B1 of the Incoterms® 2010 rules, however, now give electronic means of communication  the same  effect  as paper communication,  as long as the parties so agree or where customary. This formulation facilitates the evolution of new electronic procedures throughout the lifetime of the Incoterms® 2010 rules.

7. Security-related clearances and information required for such clearances

There is heightened concern nowadays about security in the movement of goods, requiring verification that the goods do not pose a threat to life or property for reasons other than their inherent nature. Therefore, the Incoterms® 2010 rules have allocated obligations between the buyer and seller to obtain or to render assistance in obtaining security-related clearances, such as chain-of-custody information, in articles A2/B2 and A10/B10 of various Incoterms® rules.

Under Incoterms® rules CPT, CIP, CFR, CIF, DAT, DAP, and DDP, the seller must make arrangements for the carriage of the goods to the agreed destination. While the freight is paid by the seller, it is actually paid for by the buyer as freight costs are normally included by the seller in the total selling price. The carriage costs will sometimes include the costs of handling and moving the goods within port or container terminal facilities and the carrier or terminal operator may well charge these costs to the buyer who receives the goods. In these circumstances, the buyer will want to avoid paying for the same service twice: once to the seller as part of the total selling price and once independently to the carrier or the terminal operator. The Incoterms® 2010 rules seek to avoid this happening by clearly allocating such costs in articles A6/B6 of the relevant Incoterms rules.

In the sale of commodities,  as opposed to the sale of manufactured  goods, cargo is frequently sold several times during transit “down a string”. When this happens, a seller in the middle of the string does not “ship” the goods because these have already been shipped by the first seller in the string. The seller in the middle of the string therefore performs its obligations towards its buyer not by shipping the goods, but  by “procuring”  goods  that have been shipped.  For clarification  purposes,  Incoterms®  2010 rules include the obligation to “procure goods shipped” as an alternative to the obligation to ship goods in the relevant Incoterms rules.